Historically, the only recourse for a lake association to combat swimmer’s itch was the widespread application of copper sulfate, a compound toxic to most aquatic organisms, including snails. On large recreational lakes this amounted to tons of copper applied each year, often with disappointing results. Increasing environmental concerns about this heavy metal have caused many states to ban its use.

Dr. Harvey Blankespoor, a world-renowned authority on itch-causing parasitic worms, developed a novel approach for swimmer’s itch control and has found success on recreational lakes in Michigan and Maine. When a new parasite-killing drug came on the market in the early 1980s, Blankespoor reasoned that it might be better to inoculate all the ducks on the lake, instead of killing the snails that carried the parasite. Of course, this approach required that all the ducks on a lake be trapped and administered an adequate dose of the drug.

The reason this works is that the waterfowl population on most lakes actually is very stable with resident birds.

On beautiful Glen Lake in the heart of the Sleeping Bear Dunes National Lakeshore in northern Michigan, the infection rate of the parasite in the snail intermediate host was lowered twentyfold in the late 1980s, reducing the swimmer’s itch problem to a minor inconvenience at worst. Similar results were obtained in the last few years on a large recreational lake in Maine.

There’s a purpose for most things in nature. Even mosquitos, those bloodsucking little pests! Hard to believe, but biologists tell us mosquitos have a niche in the great web of life – as a food source for dragonflies, trout, bats and birds. Guess that almost makes them okay.

Parasites are another matter, especially those that cause swimmer’s itch. It’s hard to say why they are here. Even science has a tough time with that one. But biologists have learned an enormous amount about these parasites in the last century and that knowledge is leading to new approaches for control.

What, where and how?

Parasites live on or in “hosts,” although they are not welcome “guests.” The adult worms ultimately responsible for swimmer’s itch enjoy life safely tucked away in the small blood vessels surrounding the intestines of an unsuspecting host – most likely a duck, goose or swan. (Biologists have identified at least a dozen such worm species that cause swimmer’s itch in the United States.)

At maturity, the parasites mate and lay eggs. The microscopic eggs find their way into the digestive tract and exit the bird via the feces. Heavily infected birds can pass hundreds of eggs with each defecation. Given warm water and sunlight, a very small larva will hatch from each egg within an hour and swim in search of an intermediate host, a certain species of snail.  Upon penetrating the snail the larva begins a month-long metamorphosis into what’s called a sporocyst. But then watch out. That sporocyst becomes a veritable “itch factory,” producing upwards of 4,000 new larvae every day for the rest of the summer. It’s this second larval stage that causes all the trouble.

Although the new larvae’s intended target is another duck, where it can mature and begin the cycle all over again, human swimmers sometimes get in the way. The free-swimming larvae, called cercariae (pronounced sir-care-e-e), penetrate the human skin, die and cause intense itching that can make life miserable for several days and ruin a family vacation.
Are they in my lake?

The swimmer’s itch-causing cercariae are transparent and only about 0.7 mm (1/32 inch) long, so they are essentially undetectable with the naked eye.

To date there is no easy way to know if the parasites are cycling in your lake, short of sending the neighbor’s kids out in the water as guinea pigs. And even that isn’t foolproof. It appears only 30 to 40 percent of all swimmers are sensitive to the larvae. Unfortunately, those who are will become more and more sensitive each time they are exposed.

The greatest release of cercariae for most species of parasites comes in the morning, soon after sunrise. The weak-swimming larvae can live and penetrate the skin for up to 24 hours. Some species of these itch-causing parasites rise in the water column and become trapped in the surface tension where they can travel for miles due to wind and current. For that reason the windward shore can be hit the hardest during an outbreak.

Certain days can be worse than others. Sometimes a sudden change in temperature can trigger a greater release of cercariae from the snails. Shallow water activities also appear to put the bather at greater risk for an unwelcome encounter, as does late morning to early afternoon bathing.

What can I do?

•  Avoid feeding waterfowl, which attracts more birds to your area and can increase the likelihood of bird-to-snail transmission of parasites.

•  Keep waterfowl from roosting on a raft or dock. Streamers, flags, predator decoys, netting and myriad other devices exist for this daunting task.

•  Meet with your neighbors at lake association meetings to learn about new strategies for promoting healthy lakes and good swimming waters.

•  Wear a wet suit or other protective covering – helpful, but not always practical or convenient.

•  Towel-off immediately upon exiting the water (because at least one species of the parasite produces sticky cercariae that cling to the skin before they burrow).

•  Swim in deeper water (if you’re a confident swimmer, you’re with a companion and there’s no danger of boat traffic).

•  Avoid the windward shore during an outbreak.

If you catch it

Unfortunately, no effective preventative cream has yet been developed. After the fact, over-the-counter antihistamines or mild corticosteroid creams provide relief for some people. Severe cases require a visit to the doctor where a stronger medication is prescribed. It is always best to check with a physician before using any medication, including over-the-counter drugs. And be assured, it does go away after a few days.

Teacher and biologist Ron Reimink has been researching better ways to “scratch the itch” for over 25 years. 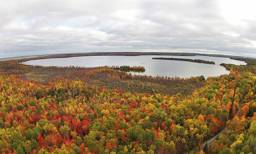 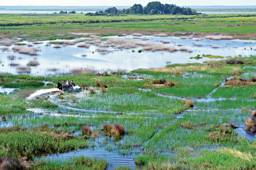 Managing Lake Weeds at Your Cabin Help Keep Loons on Your Lake

Is Any Soap Environmentally Safe for the Lake?

How Reverse Osmosis is Used to Produce Maple Syrup