A Cabin With Southwestern Style in the California Hills
🔍
Sign-In
☰

A Cabin With Southwestern Style in the California Hills

Doing it all himself, one man transforms a hunting cabin into a personal getaway.

Sometimes, the seed of an idea takes years – even decades – to germinate and come to fruition. But so often, it’s these slow-growing dreams that are most worth the wait. Such was the case with Mehosh Dziadzio’s rebuilt cabin in southern California’s Los Padres National Forest. “As a child growing up on my grandparents’ farm in upstate New York, I watched my grandfather, a Polish immigrant after whom I was named, take a run-down farmhouse built in the 1850s and transform it into something beautiful,” says Mehosh. “That’s what inspired me to one day do that myself.”

As the farm-raised youngster grew into an adult, Mehosh’s path allowed him to gather the skills necessary to eventually turn that childhood vision into a reality. Over the years, he made a living as an electrician’s assistant, lived for seven years on a commune where he learned to work with his hands, and eventually became a self-taught, professional photographer with an eye for beauty and detail.
In the late 1980s, Mehosh’s photography career was gaining speed, and he found himself living and working in his Santa Barbara studio. In search of a place to escape to, he stumbled upon a ramshackle, Depression-era hunting cabin 20 miles outside of the city.
“It was in bad shape,” Mehosh says, “which enabled me to pick it up pretty cheaply. My original intent was to fix it up and have a weekend getaway, but I quickly discovered that it would be easier starting from scratch rather than building on what was already there.”
And thus, years of planning, saving, scavenging and creating began. Mehosh soon realized that only the floor and rustic stone fireplace were salvageable, so he began redesigning a new home that would be based on the same footprint, but would incorporate design elements that he personally wanted.
“I’d always been drawn to the rustic vacation resorts along the Hudson River, which gained popularity in the late 1800s,” Mehosh recalls. “Other influences were the houses I saw in my travels throughout the Southwest, which used natural elements of earth, wood and plaster to create an organic feel. My challenge was how to incorporate the two.”

With this vision in mind – and holding tight to his lifelong dream of building a house entirely on his own – Mehosh set to work. “Using the existing floor plan, I put pencil to paper and drafted a set of plans in a matter of weeks,” he says. “Room by room, I envisioned what it should look like. Not having a comprehensive understanding of county codes or structural requirements, I took my drawings to an architectural designer, who drafted a set of plans I could deliver to the building department for permits.” Ultimately, Mehosh crafted a design that reflected East Coast and Adirondack styles on the exterior, and Southwestern design elements, such as those found in Taos or Santa Fe, N.M., on the interior. Plans in hand, he then faced the next major hurdle: Making those plans a reality. “At first, I questioned if I could pull this off,” says Mehosh. “Even my closest friends thought I was crazy, but I was determined to do this. I had no formal training in construction, but I was able to pick it up pretty quickly. Working with my hands and figuring things out as I go is something that has always come relatively easy to me.”

But, having sunk his savings in the property, Mehosh was faced with the additional challenge of procuring building materials. In the early 1990s, the “reclaimed materials” aesthetic was not extremely popular. But, with an eye towards thriftiness – and ecological integrity – Mehosh began amassing a collection of unwanted and unused lumber, hardware, doors, furniture and other supplies.
In fact, he spent several years just collecting materials before he began construction. “I needed to save where I could if I was going to complete this project in a timely manner,” says Mehosh, “and being familiar with people in the trades, I was tipped off when a demolition was about to happen. I’d go to the job site and load materials up in my van, whether I knew or not if they’d end up actually being used in the construction of my cabin. I knew that to be of clear conscience I would need to do my part and use recycled materials wherever I could.” 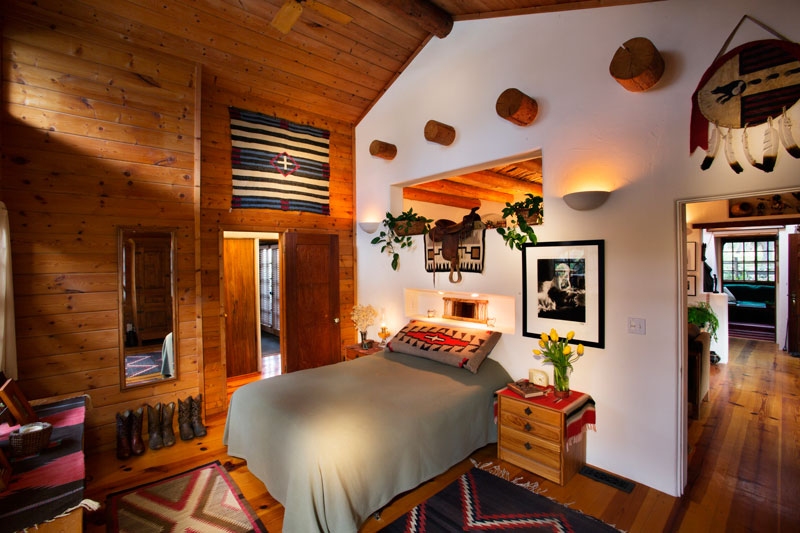 Eventually, with a lot of humility, hard work and the assistance of friends, Mehosh’s dream house took shape. Ten years after he purchased the property, the project was finally done. Low-slung and wood-sided, the cabin is nestled into the hillside, surrounded by mature trees, simple landscaping and native plants.
The interior is warm and inviting, exquisitely decorated with Native American art, Southwest-style furnishings and rich earth tones. Paneling and plaster offer a natural, rustic feel, and windows abound, providing ample views of the surrounding forest.
Today, Mehosh uses the space just as he originally intended as an escape from his hectic, on-the-go lifestyle. He retreats to the hills to meditate, appreciate nature, work in the digital photography studio he built in the basement, and party with neighbors.
“It’s perfect. I’m surrounded by national forest and have deer that come right up to the deck in the mornings. I’m only 30 minutes from town, but it feels like I’m far from civilization. All of my friends comment on how peaceful it is,” Mehosh says. “Traveling as much as I do, I never tire of coming home to my cabin in the woods.”

Get the look: Southwestern Decor

While Mehosh Dziadzio incorporated two distinct regional themes into the design of his cabin: Adirondack and Southwest, it is the Southwest influence that stands out most strikingly. Having lived in that area of the U.S., he was familiar with, and fond of, the warmth and richness found in the architecture and design in towns like Taos and Santa Fe, N.M.
After designing and building the entire home, decorating the interior was something he wanted to tackle on his own as well. With his background in photography, the artistic challenge of interior design was welcome.  “It was really quite easy since my place is filled with Native American art that I’ve been collecting for years. I wanted the furnishings to evoke the warmth of living with nature. A lot of the furniture I built myself, borrowing heavily from the designs of Thomas Molesworth, who was the pioneer of Western design,” Mehosh says.
Certain key elements provide the foundation for that distinct Southwestern style: A blend of Native American and Spanish influences that feel both ancient and contemporary. Natural building materials, such as bare wood, plaster and adobe offer an inviting, comfortable atmosphere. Earth tones abound and are highlighted by bright accent colors – red, turquoise and yellow, especially – that often appear in textiles and pottery.  Sturdy wooden furniture, upholstered in leather or suede, contributes to the rustic-yet-rugged appeal of the Southwestern style.
Designers and furniture makers that specialize in Southwestern décor include Marc Taggart & Company  and Santos Furniture , both of which build furniture in the style of Thomas Molesworth.