Emerging weary from my Honda, I hope to quickly shake off three hours of road zone prior to meeting my clients in Three Lakes, Wis. Maybe just a quick stretch. As soon as my car door slams, however, I hear the creak of Jon and Deb’s screen door opening.

“Do you want to take a boat ride first?” Jon says as I’m quickly pulled into sharp-mind work mode.

Hmmm, I think, maybe not the most efficient way to start a consult, as my time would probably be better spent walking the property, but I follow their lead. Jon revs up the engine as I relax into the thought of motoring around the lake. He stops abruptly about 50 feet in front of their dock.

“You see?” he says, gesturing toward his shoreline. “It’s square. It doesn’t really match the woods. Do you see that?”

Now I know why we’re in the boat. Jon and Deb love to fish and ski, so the view that’s imprinted in their mind of time spent at the cabin is one from the water. I see now what they see: Their recently purchased lakehome is clearly defined from the North Woods by the signature turf square stretched to the shoreline and mowed to the nub, bisected by an 8-foot-wide stretch of concrete connecting deck to dock.

“We want it to look natural,” says Deb. “We like the lawn, but want less of it. Is there some type of natural ground cover that we could use? Do you have any ideas?” She pauses as I start to formulate my answer. “The soil is really sandy,” she adds. “Will we need to bring in topsoil?”

I had many ideas, ones that didn’t involve bringing in topsoil. Intimately familiar with this northern clime, rich in boreal and northern mesic forests, I mulled over the mental list of plants that would be considered great ground covers during my long ride home. Native perennials that hug the earth beneath the woodland canopy and thrive on zone 3 acidic sandy soils were the logical choice. Vinca and pachysandra, the knee-jerk go-to ground covers with Eurasian origins, were not.

Two weeks later, I produced a plan for Jon and Deb that addressed our boat conversation, one that pulled the forest closer to their lakehome and shoreline, shrunk and “de-squared” the lawn, replaced the concrete walkway with a wooden boardwalk, and filled the space once occupied by lawn with ground covers native to the surrounding woods and meadows.
GET YOUR OWN NATURAL LOOK
Maybe Jon and Deb’s story strikes a chord with you. Maybe you’re tired of mowing the slope in front of your cabin. If you want a natural look and less mowing, then transition to native ground covers. The following guidelines will get you started.

1. Plan first, then plant
Planning is the key to any successful project. If you purchase trays of plants on your drive north for the weekend as an impulse buy from an end-of-season closeout sale, most likely those plants will sit on your porch as you figure out where they should go. Believe me, I’ve done this many times.

Create a planting plan first, adding static features such as the footprint of your cabin and outbuildings, as well as trees, shrubs, and perennial beds that you wish to keep. Modify your base plan to include your future dreams, such as the new lawn boundary and proposed new ground cover areas. Make sure you note the amount of sun/shade as well as the consistency and drainage of your soil in order to best match your plant palette to your space.

2. Don’t go changing your soil; work with what you have
Match the plants to the soil instead of changing the soil to match the plants. If you’re dealing with dry, acidic sands like Jon and Deb’s, use plants that you would find naturally in acidic sandy soils. Plant a big patch of wild blueberries, big-leaved aster or Pennsylvania sedge. Better yet, plant all three species and reap the combined reward of edibles, erosion control and aesthetics.
3. Don’t be afraid to venture vertically
When we think of ground covers, we typically think six inches or under, which limits our choices. I like Wikipedia’s version of ground cover, describing it as “any plant that grows over an area of ground, used to provide protection from erosion and drought, and to improve its aesthetic appearance.” Sweet fern, for example, a fragrant deciduous shrub that grows naturally in large colonies, may be overlooked because it is in the 2–3-foot-tall category. If we dare to venture vertically, planting this deep-rooted native as an alternative to shallow-rooted turf would stabilize our sandy slopes without the need for mowing.

4. Your budget will dictate your space and materials
Let’s say you have $2,500 to work with, and you want to use plants because you want instant results. At an average plant price of $3 each (for a 3-inch pot), you can purchase 833 plants. At an average plant spacing of 1½ feet, this will cover about 1,500 square feet (roughly 38x38 feet). Using seed instead of potted plants will stretch your dollar, as this same budget will cover one to two acres! The trade off (of course there’s one) is that native seed is slow to develop, typically requiring three growing seasons to mature. It’s well worth the effort, though, if you are the patient sort and have a lot of ground to cover.

Jennifer Baker is the owner of Sparrow Land Planning, www.sparrowlandplanning.com. 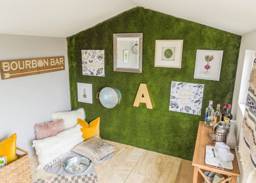 Sealing and Caulking Checks and Cracks in Your ...

How to Choose Stain for Your Log or Wood Home

Importance of Back-Brushing Stain When Applying It