A Waterfront Cabin in Wisconsin 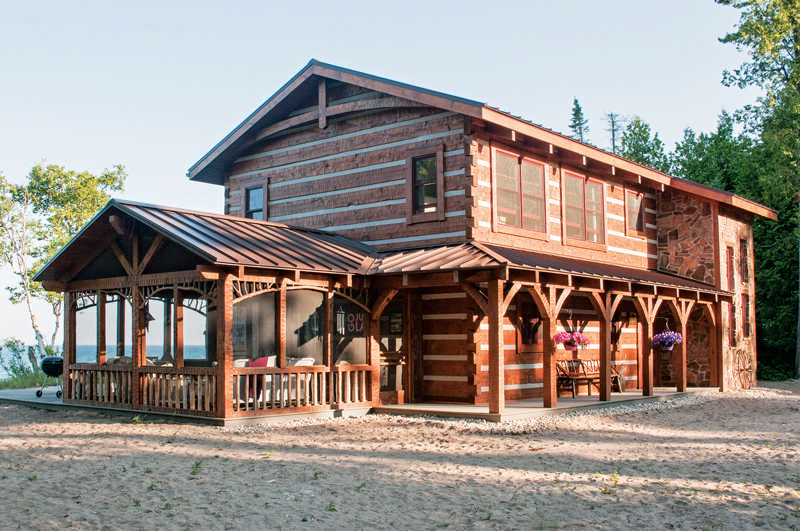 The cabin has a traditional 6x12-inch log profile, with handhewn Douglas fir logs. A 4-inch insulated chink joint meets local energy code.
At Camp Mudjeekee in Wisconsin, states a 1927 brochure, the emphasis is on “happy, safe adventure.” The “log cabin camp for girls” on Lilly Bay featured a dining hall and three “pioneer” cabins. Each of the sleeping cabins, according to the brochure, boasted an “open fireplace” and “quaint, comfortable interior.” The camp ceased operation in the 1930s, a victim of the Great Depression. But the log cabins still stand, anchored by a beautiful new one belonging to Michael and Cynthia Drewek. Michael is the third generation of Dreweks to vacation at Mudjeekee. For him, it’s like attending an extended family reunion. “I still look forward to seeing my friends that I grew up with at Camp Mudjeekee when they come with their families – the great-grandchildren of the original owners.” 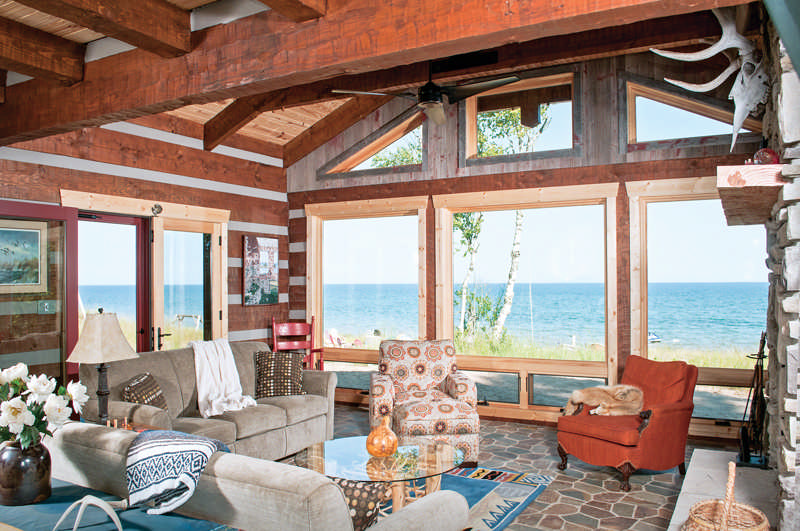 The cabin was built right on beach level. A big deck and tons of windows take advantage of gorgeous lake views. The inspiration for the great room windows came from a mountain house in Keystone, Colo. 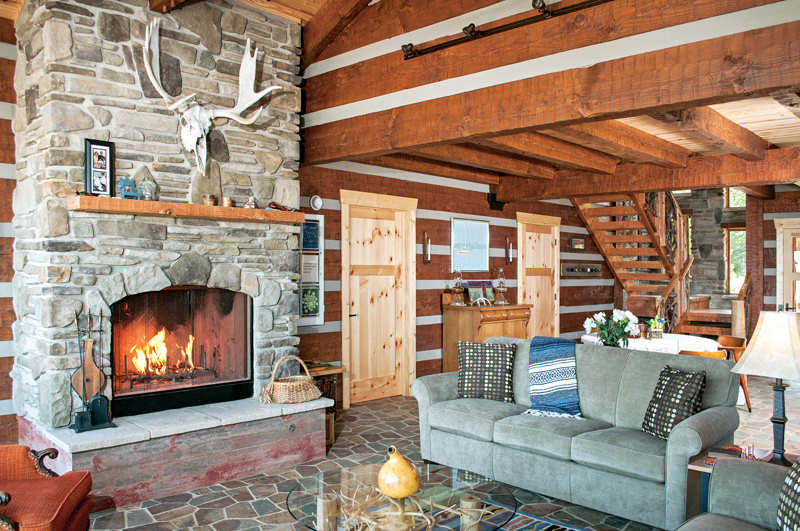 It all started with…

Michael’s grandparents, Tony and Loretta Drewek of Racine, Wis., rented “White Birch” in the mid-1950s The following spring, Tony opted to buy the cabin – much to the delight of Michael’s dad, David Drewek. David and his two brothers never lacked for playmates. The Kwas, who bought “White Pine” in the mid-1940s, had nine children. The Stuelkes, who also bought one of the cabins after the War, had seven. David became a teacher, so Michael and his two siblings got to spend spring break and entire glorious summers at “camp.” The youngsters hung out on the beach, playing kick the can and capture the flag. “My dad taught me how to sail on Lake Michigan,” he reminisces. “And we both would go fishing with one of the Kwas kids on their boat before sunrise on many cold summer mornings.” 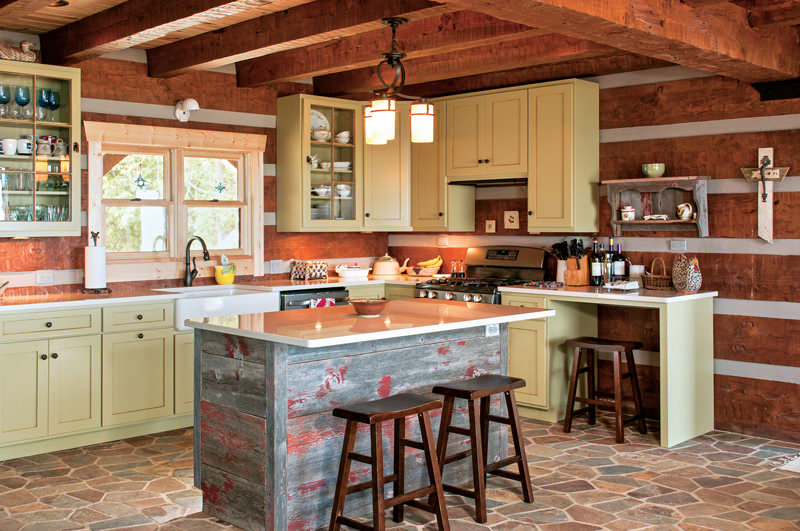 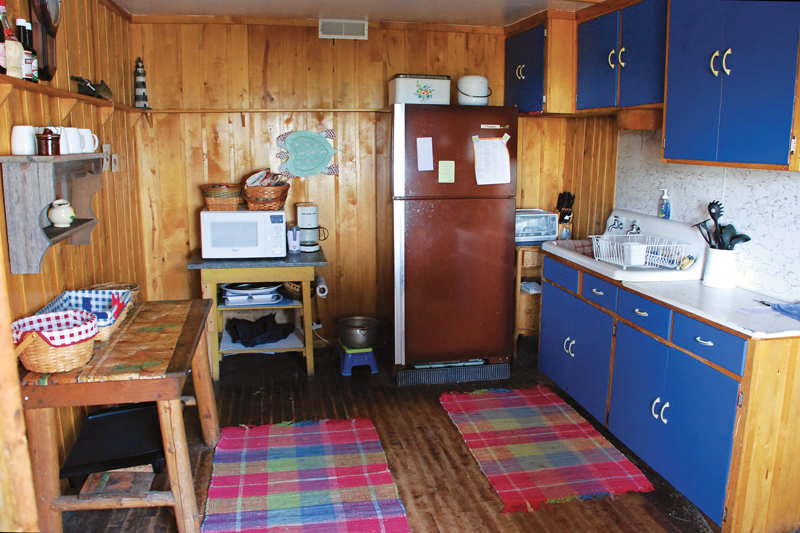 In time, Michael married Cynthia and they had two children of their own. But as the extended Drewek family grew, White Birch’s interior went from “comfortable” to cramped. The good news: Mudjeekee’s former dining hall came on the market in 2005. The bad: It was offered as a teardown. Converted into a residence for the original camp owner, Mary Higgins, upkeep was neglected after her death. A leaky roof had caused extensive water damage. “There were mushrooms growing in the ceiling,” recalls Michael. But the couple snatched it up faster than a developer could say condominium. “My grandfather left us a legacy,” he says. “Our goal was to keep it within the family.” 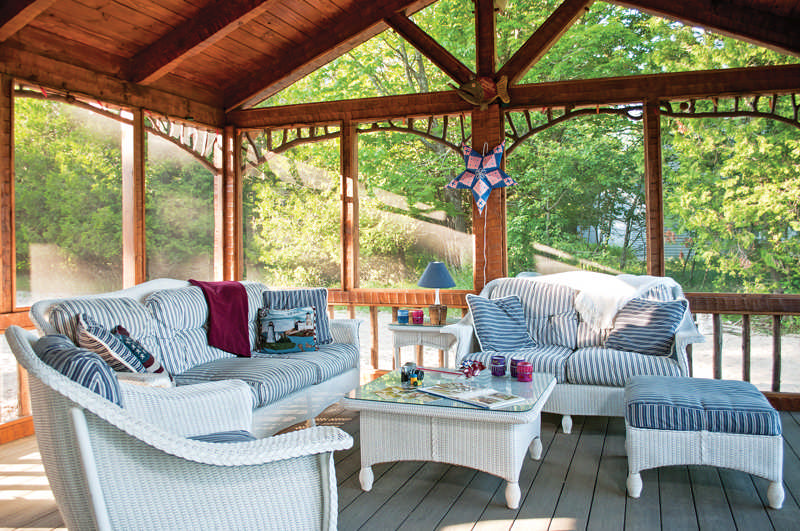 For the last 5 years in the old dining hall structure, the couple dreamed of replacing the drafty, stick-built cabin with a retreat in keeping with Mudjeekee’s pioneer spirit. They clipped pages from magazines, listed resources, and photographed cabins they liked both nearby and back home in the Denver area. Everything went into a journal. “That helped us a huge amount in designing the place, and also [with] the interior design,” notes Cynthia. A friend in Colorado, who also owns a Wisconsin retreat, suggested StoneMill Log & Timber Homes. The Knoxville company builds log and timber frame homes across the continental United States. StoneMill’s Appalachian-style cabins resonated with Cynthia, who hails from Nashville. (That’s where she met Michael, who was completing a surgical residency at the time.) “One of the things that attracted the Dreweks to our company was a product we have specialized in for 42 years,” says Sales Director Mathew Sterchi. “The traditional, hand-hewn flat log with dovetail corners and chinked joints.” The Dreweks liked the Elk River 2 and the Rose Hill standard plans. But neither offered the four bedrooms they needed to accommodate guests, as well as a teenage son and daughter. In April of 2013, StoneMill designer Remington Brown was tasked with incorporating elements from both plans, along with the couple’s wish list, into a custom design. Though client and designer never met face to face, numerous phone calls, screen shots, and photographs were exchanged over the course of a year. “Cynthia was exceptionally detail oriented,” recalls Brown. “She’s a great example of planning ahead.”

Construction started Memorial Day weekend of 2014, with Schmitt as general contractor. After his crew removed the old house and built a new foundation, StoneMill’s crew, Creekside Construction, got to work. Creekside assembled the log and timber components and installed rigid insulation between log courses and under the standing-seam metal roof. The two-story shell was completed by the end of June. 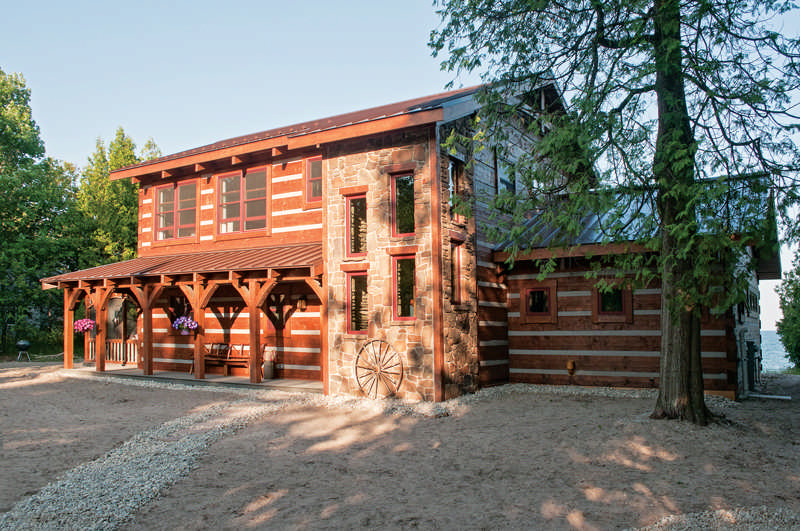 Schmucker Log Home Restoration, an Amish family business outside Green Bay, did the chinking and staining. Choosing colors from Perma-Chink’s array of products was “one of the hardest, most stressful decisions,” Cynthia says, only half in jest. “It makes a huge impact.” Ultimately, they went with medium gray for chinking, and a chestnut stain. Schmitt had the interior of the 2,500-square-foot cabin finished by the middle of November. Like the Elk River 2 model, the great room projects forward, overlooking the water. The main level is an open plan, with a master suite on the south end balanced by a screened porch on the opposite end. Three bedrooms occupy the second floor.

Because the cabin is on the beach, Cynthia wanted a floor that could: 1. Stand up to sand, and 2. Not show the grains inevitably tracked inside. “We have slate in Colorado, and it’s very durable,” she says. Rather than square tiles, Cynthia opted for an irregular pattern to create a natural look. Interior eaves in the great room and bedrooms are trimmed with boards salvaged from a barn in Green Bay. The same barnwood wraps the kitchen island and the area below the great-room fireplace. 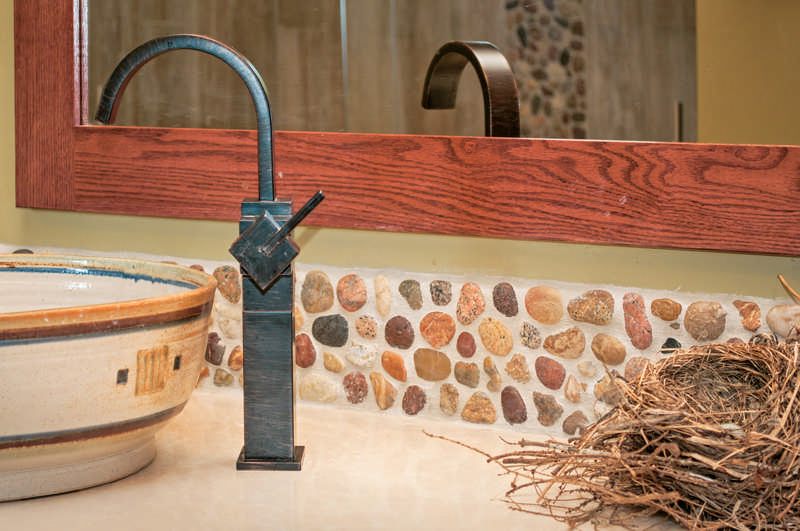 There’s a barnwood look in the master bath shower, too, only there it’s ceramic tile. A vertical mosaic strip made by Cynthia, her mom and sister accents the tile. “We spent the weekend gluing and enhancing stones from the beach,” she says. To bring the outside in, Cynthia chose slate flooring for the main level in earthtones of brown, blue, tan and green. “When I was [at the site] over the summer, I would bring in all the pieces and make sure the colors went together.” The yellow-green color coordinates well with the cabinets, painted Sherwin-Williams Bamboo Shoot. Silestone quartz kitchen countertops with grey veining resemble granite. “We have it in Colorado and I love it,” says Cynthia. “It’s very durable. You don’t have to seal it.” “We were going for lasting,” she continues. “I want this place to be a 300-year-old house that will survive the elements. Considering we built the house from 1,200 miles away, we’re pleased as punch”. 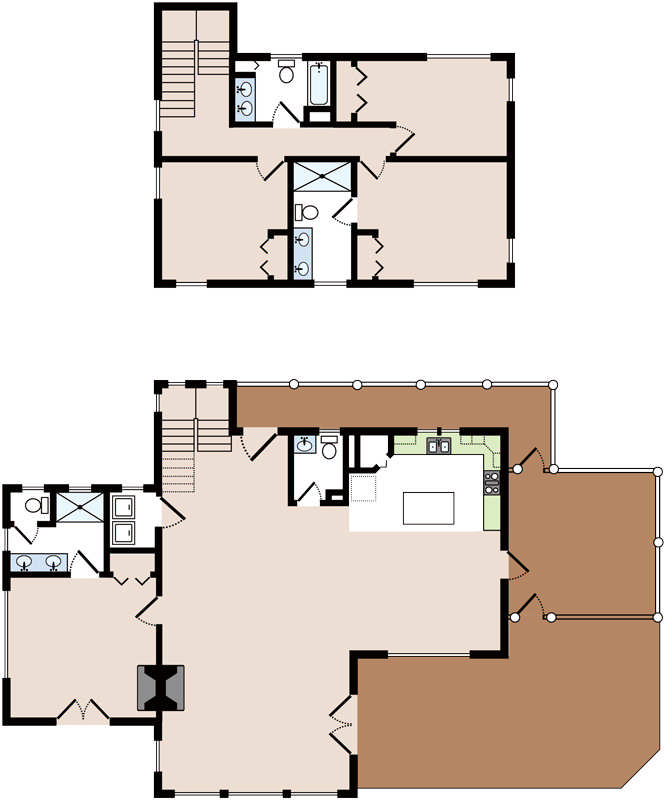