A Log Cabin Gets an Invisible Addition
🔍
Sign-In
☰

Transforming a log cabin into a home for the golden years.

Transforming a log cabin into a home for the golden years. 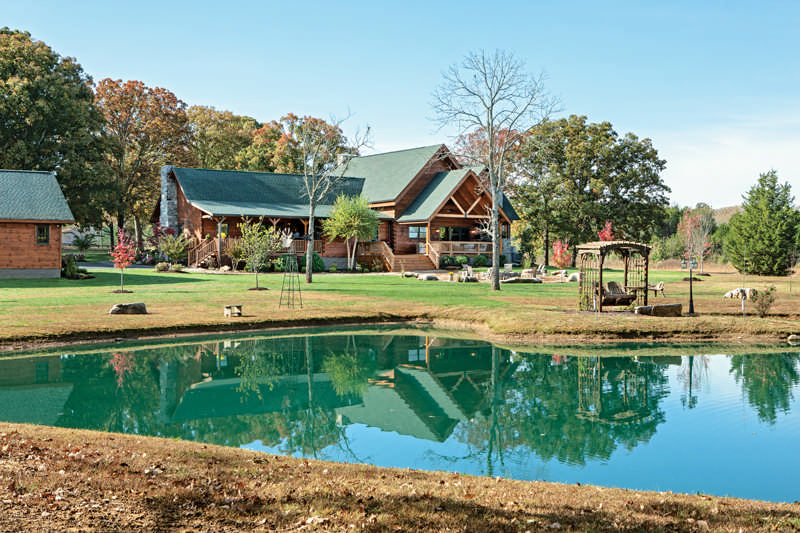 In 2014, as Gary and Suzan Slayden looked toward retirement, they sold their suburban house in Murfreesboro, Tenn., where they’d lived since 1988, and purchased a lot in a golf-course community in town. Because they knew designing a new house would take 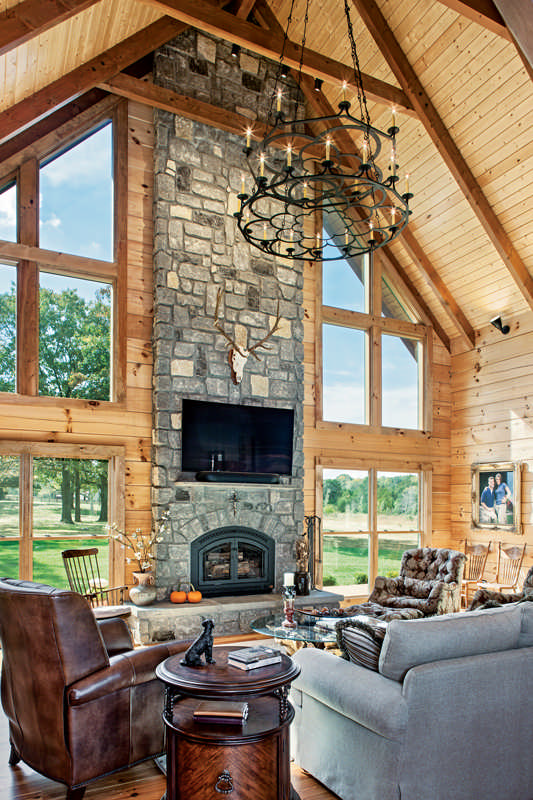 time – they had designed and built houses previously in their married life – they temporarily moved to their 1,100-square-foot log cabin they’d built on 221 acres. The cabin, about a half-hour’s drive into Rutherford County, saw use by Gary on his weekend hunting and fishing trips.

The months went by, and designing a home along a golf course gave way to the breeze ruffling the surface of the pond behind the cabin, the burnished colors of the leaves on the hundred-year-old oak trees lining the long driveway, and the view of the sunrise from one porch and the sunset from the other. And the realization that it was here they wanted to retire to instead. Calling Honest Abe Log Homes, the company through which they had built their hunting cabin in 2009, they inquired about the possibility of adding on significant square footage. “We liked the log home scenario,” Gary says. “It felt right for us.” “Once we made the decision to add on,” adds Susan, “neither of us had any hesitation about it.”

Moving forward with the addition to the cabin involved one main directive to the builders: that the addition not look like an afterthought. The original cabin was an A-frame with a wall of windows from patio to peaked roof, bisected vertically by a tall wood-burning fireplace that was 80 inches across and made of local stone. 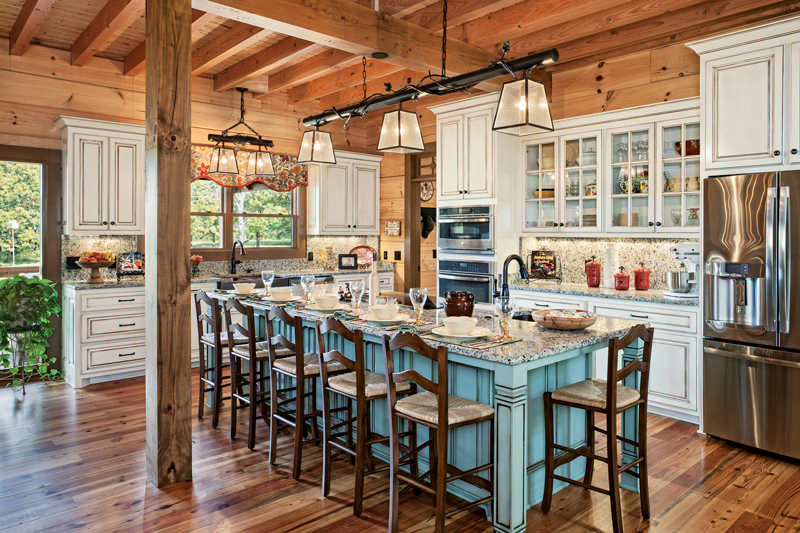 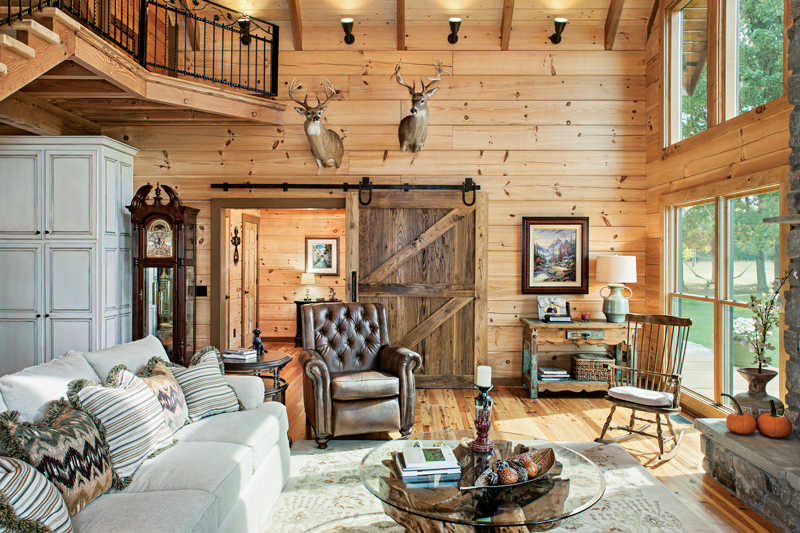 An open loft above the main-floor bedroom suite overlooked the kitchen, dining area and great room that all merged together, oftentimes called an open concept design. The 2,700-square-foot addition essentially was a grander log cabin alongside the first and connected the two by functional space that included a laundry room, a powder room, storage areas and a mud room. The new space gave the Slaydens two more bedrooms and bathrooms and much more room for large gatherings of family, church groups or amateur sports teams. The original cabin makes an ideal in-law apartment. 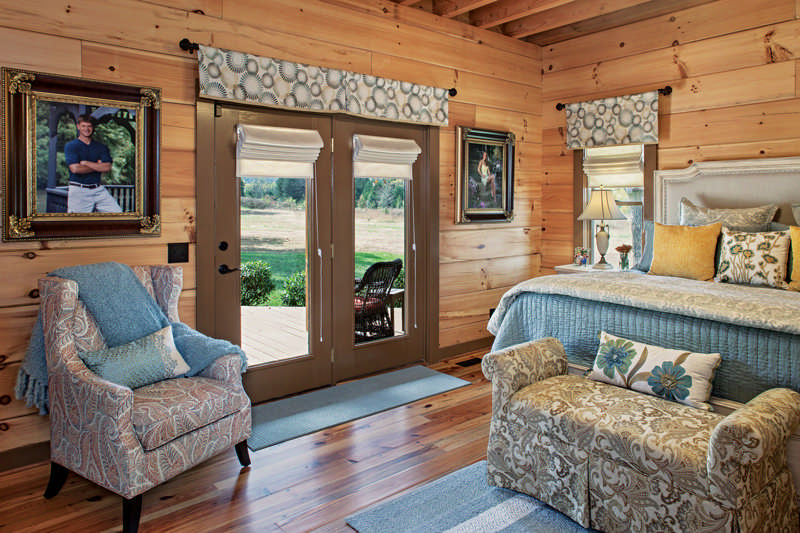 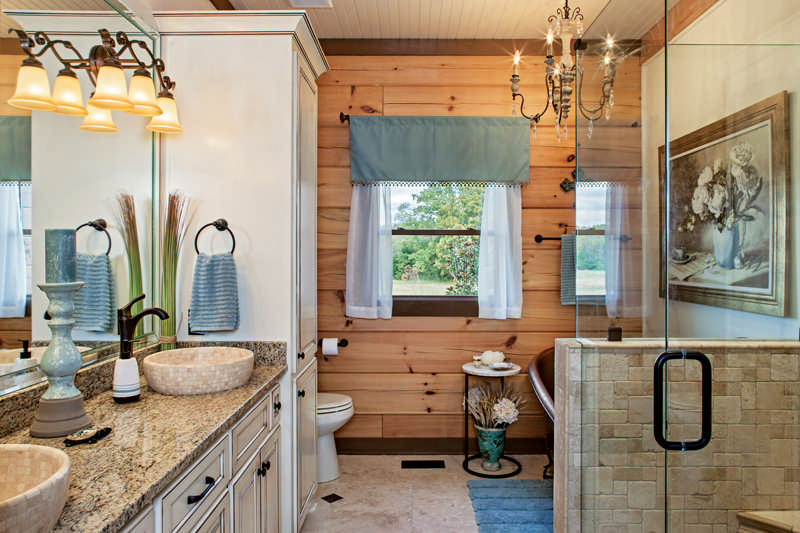 “It’s like we have two homes in one,” says Gary. “Guests have their privacy, and we have ours.” Honest Abe’s Dan Smith, who worked with the Slaydens on their addition, said it’s not uncommon for log home owners to build additions much larger than the original structure. The Slaydens’ addition blended seamlessly with the original in large part because Honest Abe could pull up the specs for the original cabin and had a design team to work on melding the new cabin with the old. Smith was able to put the Slaydens in touch with suppliers of reclaimed wood and sliding barn doors, two design features that he sees have become more popular.

Connecting with the outdoors

The Slaydens’ addition emphasized their attraction to outdoor living. Previously, they had built a wood-working shop near the two-car carriage house garage and a pavilion with a fireplace near the pond. With the addition, they bumped up the number of porches to five, one with an outdoor fireplace, plus a deck. 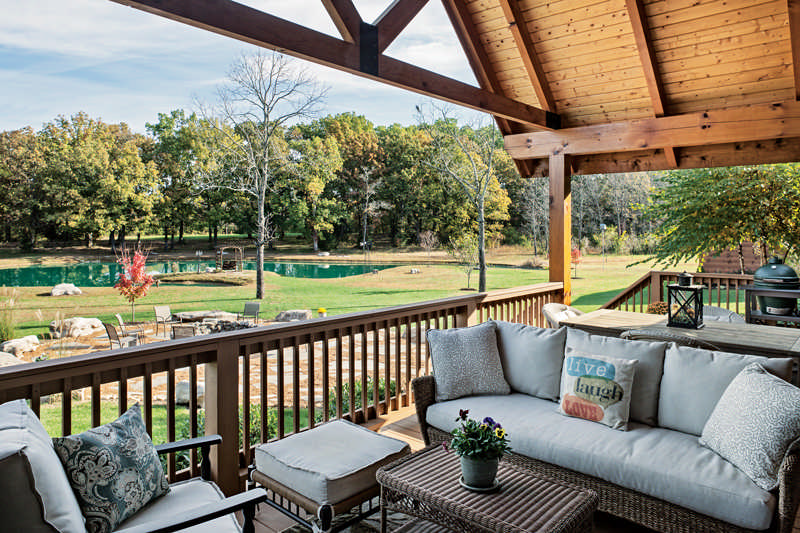 The expansive acreage leaves plenty of room for four-wheeling and areas Gary reserves for hunting deer. Years ago, they had stocked the pond for fishing. Gary and Suzan each harbor warm childhood memories of spending time with grandparents who lived on farms. When Suzan reflects on the fast-paced life she and Gary lived, keeping up with all of their children’s activities, she is all the more pleased to be able to offer a taste of country living to their grandson. Their cabin is a short drive from the interstate that connects them to the towns where their son and daughter are making homes for their families. “Kids today don’t have many opportunities to spend time in the country,” Suzan says. “Our grandson stays overnight with us once a week. He loves those outdoor experiences – and the tractors and four-wheelers and everything else with big wheels.” 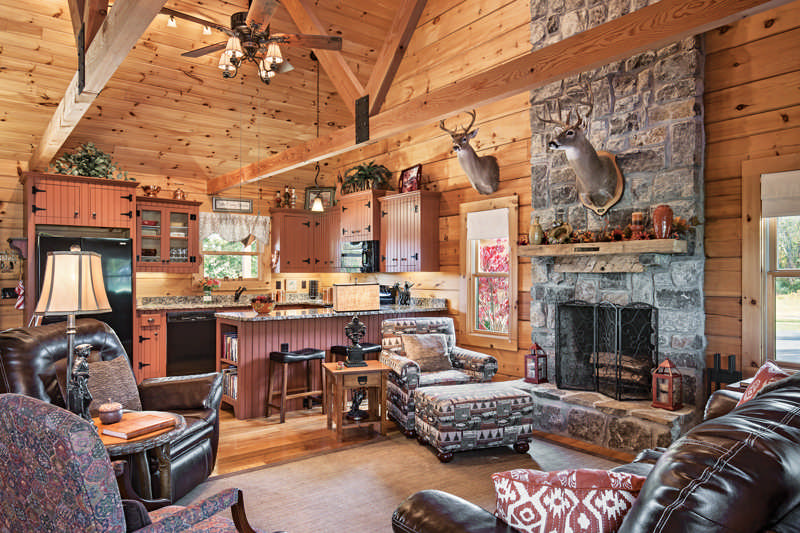 Inside, the cabin feels warm and welcoming. While the original cabin was wood, stone and glass, the addition mixes in some traditional touches. The bedrooms have accent walls constructed with drywall and painted to add splashes of color, and the bathrooms have tile. The master bath features a copper tub. The ceilings in every room are at least 10 feet tall and in the great room soar to 28 feet at the center peak. To complement the heavy timber framing of the beefy ceiling in the main living area, the Slaydens chose metalsmith Jason Bell, of B and B Metal Designs, to custom forge hand-wrought iron light fixtures and the railing on the open staircase. One of Bell’s fixtures illuminates the Slaydens 5-foot-wide by 10-foot-long dining table they crafted out of reclaimed wood from an aged barn. The iron chandelier he forged for the great room measures six feet across. The Slaydens splurged on heart pine flooring and reclaimed a chestnut door from a century-old barn to use as a sliding door between the foyer and the great room. Because of the wood floors, they also installed a central-vac system. “We look at the floors all the time,” Gary says. “There are places where it’s important to spend more money and get what you want.” Once the Slaydens decided to make the cabin their year-round residence, they appreciated being able to work with Honest Abe’s design team to customize a home to their specifications, rather than trying to make changes to a stock plan. “Hiring a good designer was money well spent,” Gary says. “Log homes are unique,” he continues, “and that adds to their value. There’s just a different feel to living in a log home.” 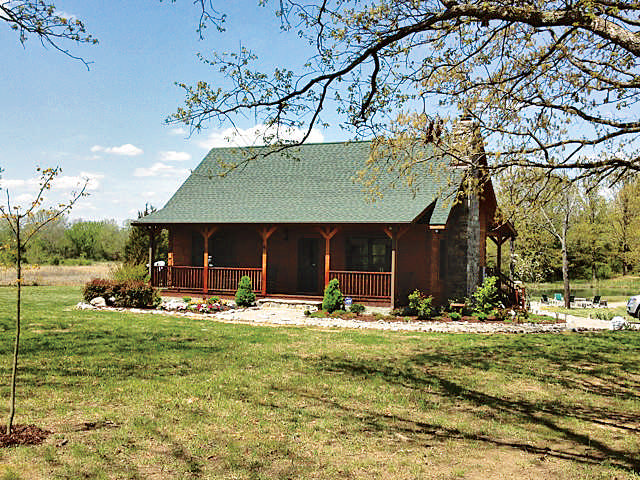 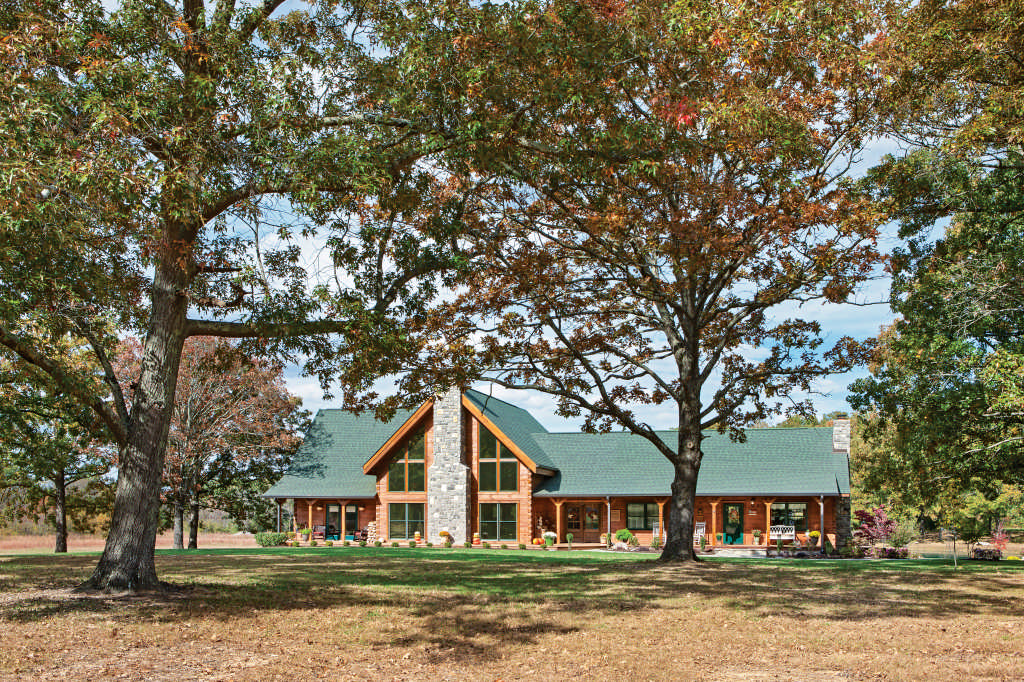 Nuances of building with logs.

Gary and Suzan Slayden had built two traditional houses before proceeding with their original log home hunting cabin in 2009, which they used as “our learning cabin,” Gary says. They found out that building a log cabin requires more thought and planning than with a traditional house and offer their insights to others. “Don’t skimp,” he advises. “Spend the money to get quality materials and quality people.”

Not even metalsmiths can tell the difference between wrought iron and steel until they break a piece open and look for the century-old chunks of slag and a certain flakiness lacking in contemporary steel. Or, they look at the price tag. Authentic wrought iron can be quite pricey, says Jason Bell, co-owner of B and B Metal Designs in La Vergne, Tenn. “I’d have to look for something made about 150 years ago, like an old cemetery gate, and use that material to make something today.” Because “wrought” can be defined as “worked,” he always clarifies with architects and designers whether they are looking for the authentic metal or hand-worked steel. Iron is an element mixed with other alloys to make steel, which results in a broad spectrum of strengths and textures. In working with clients, Bell first asks for some “inspirational images,” photos that illustrate the look or ambience the client wants. Next, he visits the space where the piece will go following with some rough sketches of shapes and objects for the client to consider. Clients will give feedback, such as, “I wish sketch 8 had a little of sketch 2.” From there, Bell refines the images and submits a full drawing of the piece to the client. The number of people choosing metalsmith as a career is dwindling, and that makes the original pieces Bell creates all the more valuable. “Sometimes people see a fixture they like in a retail store and want me to create something similar,” he says, “and they’re surprised that my piece may cost double what the store charges. Every piece involves extensive design work, including making sure it operates properly and fits the space well. If I made a thousand of the same thing, the price would go down. If I design something for you, you’re the only person who has that.” 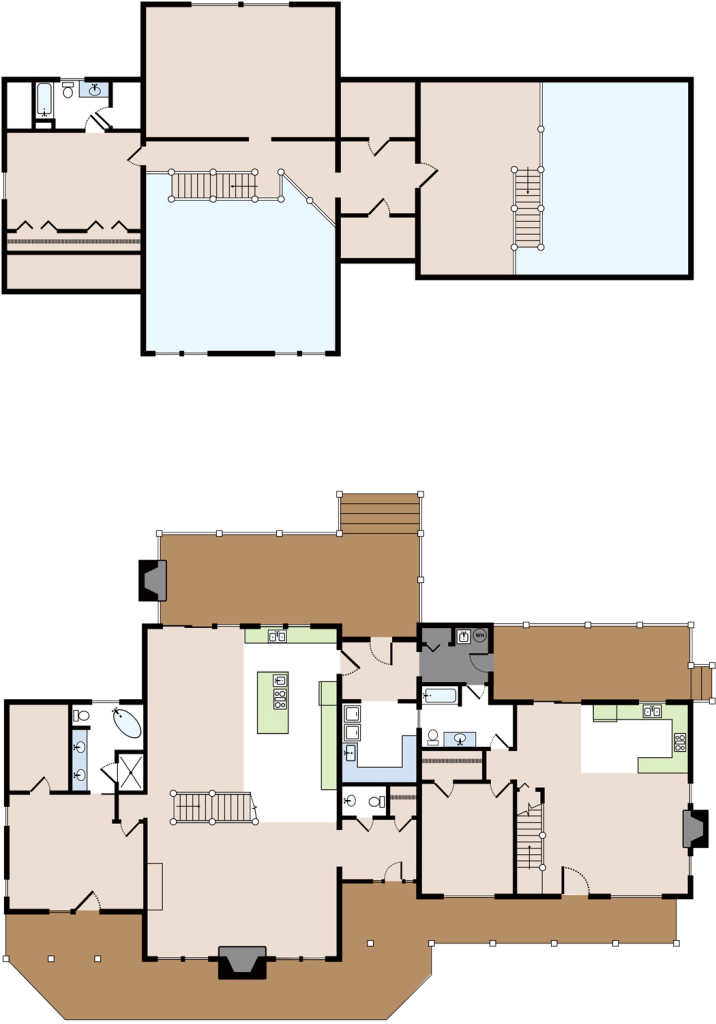 Nancy E. Oates writes about cabins and imagines that the pine trees outside her window in Chapel Hill, N.C., screen a lakefront view.